More than 15 years ago a colony of nineteen cats was discovered living in the woods behind a new business in Cornelius. When looking for a humane way to prevent this colony from continuing to breed and grow, it was learned that the only existing option was for animal control to “remove” the cats, which generally results in euthanasia. Not satisfied with that option, an effective alternative was sought and research revealed a method known as Trap-Neuter-Return-Manage (TNRM).  Moving forward with the assistance of local veterinarians, it was deemed a big success. Once word got out that there was a humane alternative for feral cats in our area, the public began reaching out for assistance. The rest is history. As for the feral colony behind the business, they lived out their days happily, their numbers dwindled, and today only one cat remains. 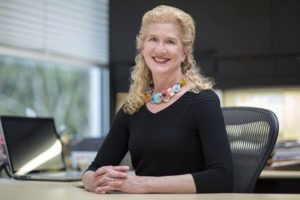 Abigail didn’t realize that her wish to help a large colony of feral cats behind her business would one day evolve to becoming the preferred solution for humanely managing the Lake Norman region’s community cats. However, after she learned that the only option for feral cats in the Lake Norman area was trap and kill, she decided to create a small TNR (trap-neuter-return) program to provide TNR services and the word began to spread. Several years later, the program was officially awarded a non-profit status, and the rest is history. Today, she remains passionate about providing community cats with spay/neuter services to alleviate the serious issue of over population and the high rates of cat euthanasia within our shelters.

In addition, Abigail also creatively and successfully operates the oldest real estate firm in the Lake Norman region. Since 1998, she has served as president of Lake Norman Realty. However, the impact of Abigail’s leadership is felt not only within the real estate industry, but in her community as well. One of her favorite quotations is by Mahatma Gandhi: “Be the change you wish to see in the world,” and her commitment to creating positive change is apparent throughout her community. Abigail is a founding board member for blueharbor bank, a community bank serving the Lake Norman region. She is also vice-president of the non-profit economic development organization, SICDC (South Iredell Community Development Corporation). Furthermore, Jennings is a co-founder of Pioneer Springs Community School, a charter school rooted in the arts and nature, where she serves as Chairman of the Pioneer Springs Board of Trustees. Abigail graduated from the University of North Carolina at Charlotte with a Bachelor of Creative Arts degree. She and her husband, Randolph Lewis, live in Cornelius with their daughters Genevieve and Ia, and their eleven adopted cats. Abigail enjoys being with her family, gardening, and painting. In 2012 her artwork was featured in a two-woman exhibit at the Iredell Museum.

A native of Columbia, SC, Robin’s compassionate nature toward animals developed at an early age as the result of her father, a biology teacher, instilling in her the value of  both appreciating and respecting nature.

Upon graduation from Clemson University with a BA in education, Robin served as an intern on Capitol Hill for Senator Strom Thurmond, prior to pursuing a career in commercial aviation.  After 24 years as a flight attendant with USAirways, Robin transitioned to corporate aviation as a demonstration flight attendant for Gulfstream Aerospace Corporation out of Savannah, Georgia.

Quite literally travelling the world while working for many high-profile clients and foreign government officials, her travels afforded the opportunity to experience how other cultures viewed animals and she was saddened by the reality of what she witnessed.  Having been a life long lover of all animals, she realized the worst thing she could do was stand by and do nothing and the best place to begin was right in her own community where it was possible to measure the level of success.

Calling the Lake Norman region home since 1991, Robin currently serves as Executive Director of the Lake Norman Lucky Cat Program (LNLCP), where she has elevated the program to its current status as it continues to expand under her leadership.  From educating to advocating to engaging the community, Robin has made it her mission to raise awareness and promote improved animal welfare, in particular the humane, long-term solution to managing community cat populations through Trap/Neuter/Return/Manage (TNRM)

A 2014 graduate of Leadership Lake Norman, Robin has also served as retail Co-chair for the Bag Lady Luncheon, benefitting Patriot Charities (serving our local wounded veterans).  Additionally, Robin is a charter member of Humane Society of Charlotte’s Partnership for Pets, has been recognized by Humane Society of Charlotte (Women in Animal Welfare) for her work to increase and promote awareness of animal welfare and also recognized by Business Today as one of the area’s ‘Top Women’ for her role as executive director of the Lake Norman Lucky Cat Program.  She has mentored a Girl Scout through to completion of her Gold Award and a Boy Scout to achieving his Eagle Scout Award. Robin also serves on the Board of Directors of SnipWell Spay/Neuter and Wellness Clinic.

Most recently, Robin is proud to have been a part of expanding the Lake Norman Lucky Cat Program to Kinston, NC where it has been widely and well received, has experienced tremendous growth, and is now considered the mainstream approach for the city’s community cat population.

Together with her life partner and biggest supporter Ray Harris, they maintain their homes in Cornelius, NC, and Jupiter, FL, for the comfort and convenience of their two cats, two Australian Lady Gouldian Finches, one lake dwelling Eastern River Cooter (turtle) named Wilbur, and a roof rat named Fred.  When in Jupiter, Robin volunteers in the hospital of the Busch Wildlife Rehabilitation/Sanctuary and as an animal handler at education events.